What song goes like da na na na na da na na na I think it has the words turn up the music or turn up your music and I think it is by some female pop disco dance music band?

As the first part of this post is quite long, I shall punctuate it with some ridiculous questions I just found on the internet.

It's no secret that musical notation is a problematic issue.  If music exists in sound, which seems reasonable to say, then the precise status of any written account of it is always going to be questionable.  Any musical notation is in some sense a compromise, an inauthentic replica of the 'real' event, which is the work's performance.  In classical music this problem is circumvented somewhat by the established tradition in which a 'score' precedes performance; the score is a prescription to performance and thus has a vital and well-defined function.  That the ensuing performance will be conditioned by the limitations of the score's system of notation is arguably a problem, but in the context of the concert-hall tradition it is very much a manageable one.

Everything becomes far more complicated when contemporary popular music is thrown into the mix; this music will often require no musical notation at any point during its production, and if notation is brought into play it is often retrospective.  My favourite example is the incredibly bizarre The Beatles: Complete Scores, which contains really awful transcriptions of everything ever released by the Beatles.  Though such a project might be considered entirely futile, it is at least true that the inevitable inaccuracy of this written account is largely mitigated by the equally inevitable inauthenticity of anybody actually trying to use the score to replicate the Beatles' performances.

That said, it remains questionable whether it's really fair to put popular songs into a medium such as Westernized notation which is unknown to many of the writers of such songs (eg. the Beatles), and also to a majority of their listeners.  This problem becomes even more acute in the case of music from other cultures, whose music might well be very awkward to accommodate into the arbitrary format of staves and crotchets and so forth 'we' happen to use: perhaps the music makes structural use of timbre, perhaps the tuning system is different; perhaps etc. etc.  The ethnomusicologist Kofi Agawu has argued that Westernized transcription still might be worth a go - in a crude paraphrase, preserving music inauthentically is probably better than not preserving it at all - but this argument still feels, unfortunately enough, like something of a compromise.

The big question, then, is how (and if) we should best account for non-Western-classical music in a written form.  Perhaps a different system of notation would be more appropriate - maybe one which doesn't require esoteric knowledge in quite the same way that the current standard one does.  What system this might be, though, does not appear clear to musicologists at the moment.

However, unbeknownst to them, THE INTERNET HAS SOLVED THIS PROBLEM COMPLETELY, via answers.com, which frequently serves as the perfect intermediary between the inquisitive consumer of music and the music itself (ITSELF).  And it does this, marvellously enough, simply by according a far greater respect to the intuitive power of music aficionados than anybody in history has ever before dared.  Hence, the following exchanges are possible: 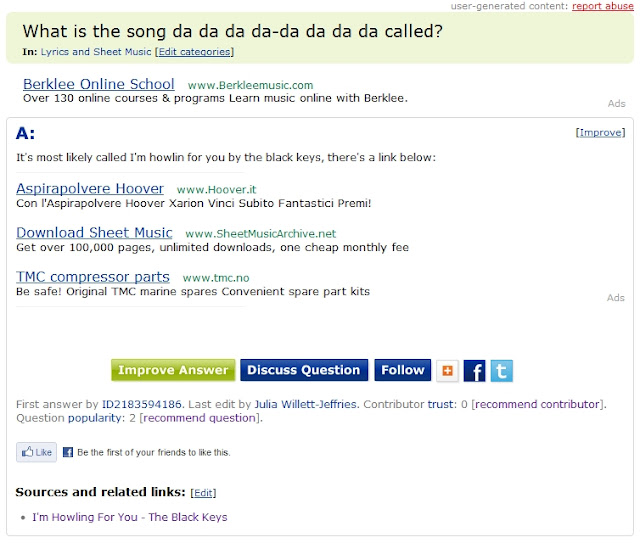 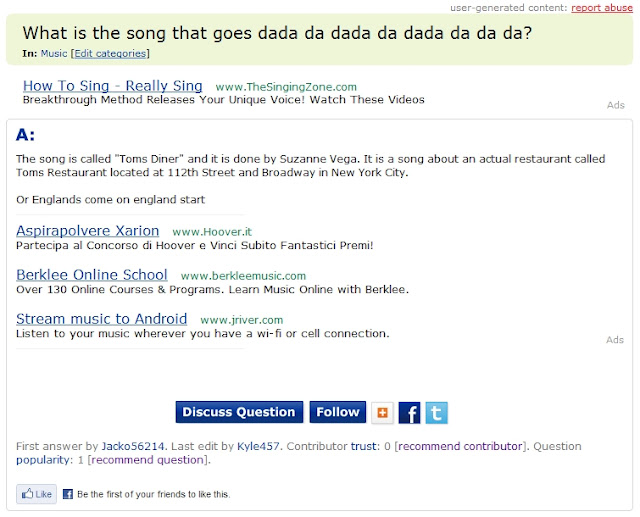 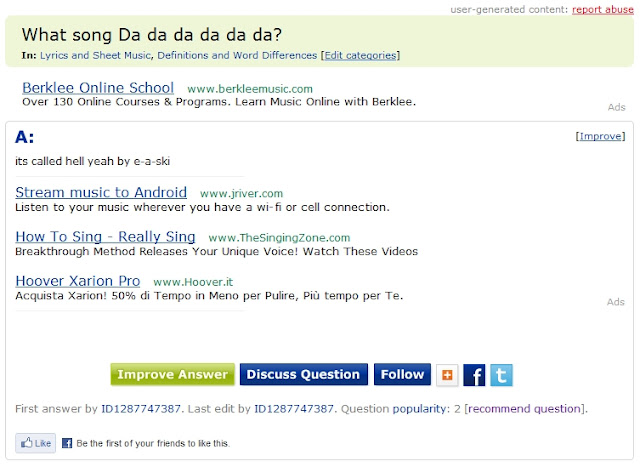 That last one is pretty difficult to hear - but I think they're talking about the bit in it that goes Da da da da da da.
Crazy, eh.  It's a bit like a form of shorthand where you leave out all the vowels - only here you also leave out all the consonants, and then you write 'da da da' instead.  An effective enough method, it would appear, to take us seamlessly from

What is particularly striking about that example is how the answerer somehow managed to overlook the numerous errors in the question – there are, surely, the wrong number of 'da's, and the separation indicated above by the lack of dash in the middle also doesn't make any sense.  No less remarkable is how the answerer successfully chose not to bow to the common-sense inclination which suggests that it is virtually impossible to separate this song's refrain from the repeatedly shouted word 'Saturday', as the asker has apparently done.  'Saturday Night's Alright for Fighting' is a really remarkable call - certainly not something I'd ever have thought of as the answer.  But still, there we are.  The spirit of music must surely have been at work here, to guide us so securely to the solution.  That or it's wrong, I suppose.

Sadly enough, many of the stacks of such questions on answers.com are still awaiting a response. As just one example:

To be fair, though, this question might just be an expression, along the lines of 'Good lord!' or 'What the hell?' – which I suppose doesn’t really necessitate a response as such.

Anyway, the point is that it's never been easier to communicate music through text than the answers.com forum makes it, and we should be embracing this huge advancement in transcription technology.  I would like to see more music journalists writing about that bit at the begging that goes like da da DA da da and then there’s a guitar solo or something I think its sung by a woman or whatever.  Oh yeah thats it its weberns' concerto for nine instruments second movement thx
posted by andrew cheese at 22:40

labels: #changeBTWcover, hyperlinks, music, other, that's not a number, the internet